We live in New York City having recently moved from Malaysia; from real jungle to a concrete one!

We live in New York City having recently moved from Malaysia; from real jungle to a concrete one!

I grew up in the Gower, Wales and Tom in London, although as a child he spent many Summers with his grandparents in Swansea and Gower's beaches.

Tom proposed while surfing in Rhossili Bay (popped the question after I almost knocked myself out with my surfboard...). We married in 2002 in St Cenydd's Church, Llangennith village where Stormy Castle is located.

We have been on the expat trail for the past nine years and have lived in Texas, Malaysia and now, lucky us, New York!

But... home is still the green, green and invariably wet grass of Wales. In 2006, and in between the move from Houston to Kuala Lumpur, a surf trip to Llangennith resulted in us stumbling upon Stormy Castle; a place to call home given our nomadic lifestyle!

We are both lawyers, although I recently retrained as a journalist; a better fit with young four ones.

We visit Stormy every year; it's a superb place.

Listed on Tripadvisor since
March 2011 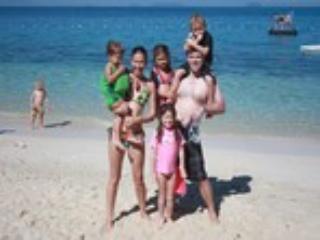